Bitcoin has not performed well in the past 24 hours. After peaking at $12,400 on Monday, the leading cryptocurrency’s price action has rapidly reversed.

Here’s what analysts are thinking after the 7% drop.

Bitcoin Is in a Tough Spot After Correction

When Bitcoin broke higher on Monday, many analysts were extremely optimistic about what was to come for the asset. $12,000 was then a pivotal resistance for the cryptocurrency, acting as a point at which three separate rallies topped.

Bitcoin’s fate rapidly changed, though, as it fell back below $12,000 during the correction on Tuesday, which has continued into Wednesday.

Analysts have not been impressed with this price action, to say the very least.

One cryptocurrency analyst noted that Bitcoin’s failure to hold $12,000 sets the stage for a drop towards the $11,000 range lows. He shared the chart below to display this sentiment, writing in an accompanying remark:

“$BTC Took out the high, then dumped pretty aggressively. Looks good to test $11070 one more time to me. If it however reclaims the red line ($12100) on a closing basis I think it’s good for another $1000 candle up. Bears got a pretty neat invalidation here.” 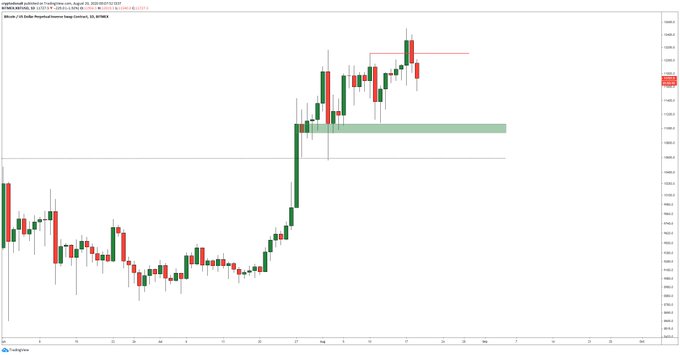 Another analyst, who predicted the ongoing price action, also sees Bitcoin returning to the $11,000 region. This is the same trader who predicted at the start of 2020 that the price of BTC was set to hit the $3,000s while XRP was likely to move to $0.11-0.13.

Bitcoin will need to hold $11,000, then return to the local highs to confirm that the uptrend remains intact.

Unfortunately for BTC, legacy markets aren’t looking much better than the cryptocurrency market. The head of technical analysis at crypto research firm Blockfyre commented on the charts of legacy markets:

“Looking at Legacy. Look at all that volume for that little Doji. Lots of selling that happened at the highs Followed by this bearish engulfing on the daily. Golds rally looks to be done short term too. I think we have short/mid term reversals being printed in ALL markets $BTC.”

The stock market and/or gold dropping will likely push the Bitcoin market lower, especially considering the correlations that have formed over the past few months.