Bitcoin has been caught in the throes of some immense turbulence throughout the past few days.

This volatility has primarily favored sellers, and today’s price action has only further enhanced the notion that further downside may be imminent for the benchmark cryptocurrency.

Following a speech from the Federal Reserve Chairman earlier today regarding the US Dollar’s inflation, Bitcoin and most other macro assets rallied higher, with BTC surging from lows of $11,200 to highs of $11,600.

This movement was short-lived, however, as the rejection it posted at $11,600 caused it to see a rapid decline back towards its recent lows.

This has resulted in the cryptocurrency flashing some intense signs of technical weakness, with one analyst now noting that a movement towards $10,500 is imminent in the coming few days.

Any potential downtrend in the near-term may be further bolstered by heightened selling pressure from miners. Data suggests that miners are beginning to move Bitcoin into exchanges at a rapid pace.

At the time of writing, Bitcoin is trading down just under 2% at its current price of $11,300. This marks a notable decline from recent highs of $11,600 that were set at the peak of the fleeting early-morning rally.

Analysts are noting that the rejection posted at these local highs was a grave sign for the crypto’s near-term outlook, as it shows that bulls don’t have enough strength to invalidate the heavy selling pressure that has been slowing its ascent.

The key support levels to watch in the near-term sit at $11,000 and $10,500. If BTC posts a strong reaction to either of these levels, then it may be able to continue its mid-term uptrend.

A break below both of these levels, however, would put it at risk of seeing a decline beneath $10,000.

One trader spoke about Bitcoin’s technical outlook in a recent tweet, noting that he expects to see $10,500 in the near-term.

“BTC: Clean sweep of the high into supply / OTE. We caught a short at $11506. Think we see accelerated to the downside soon,” he explained while pointing to the chart seen below. 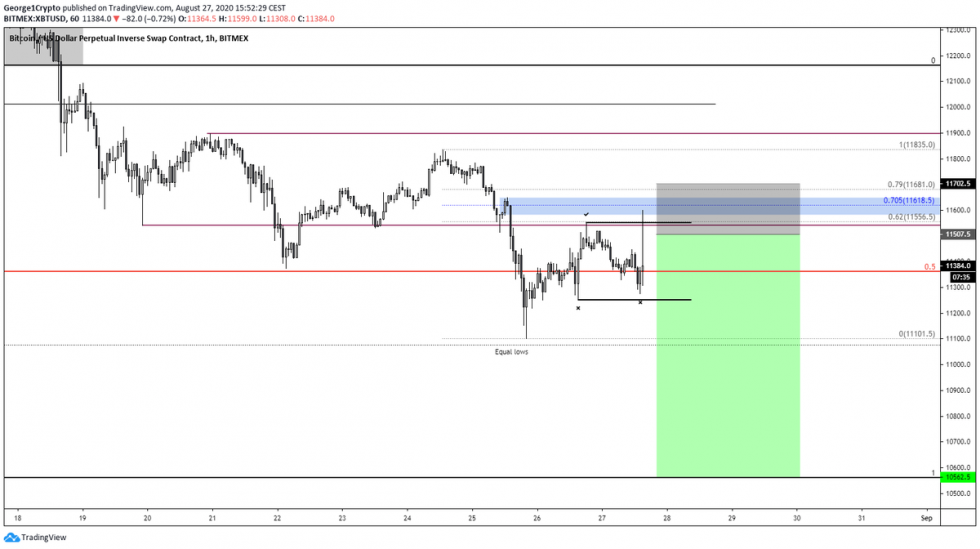 Analytics platform CryptoQuant explained in a recent tweet that a total of 280 Bitcoin was just moved to an exchange from a wallet associated with miners.

Although in isolation 280 BTC may not be enough to cause the crypto to slide lower, it may be a sign that further selling pressure from miners is imminent.

How the market trends in the coming few hours should provide insight into the near-term significance of this latest rejection.