Analysts Expect Bitcoin to Continue Rally After Recovering to $18k

Bitcoin faced a strong drop two evenings ago when it fell from $18,500 to $17,500 in the span of minutes. But true to the volatility of the market, the cryptocurrency has quickly bounced back. As of this article’s writing, the price of BTC sits slightly above the key $18,000 resistance, though was as high as $18,200 just hours ago.

Analysts think that Bitcoin will continue its ascent as it manages to hold the low-$17,000s as support. The low-$17,000s are of importance on a technical level to Bitcoin because these levels acted as support and resistance during the 2017 and 2018 peak.

Analysts think that Bitcoin moves higher from here as it manages to hold the low-$17,000s as support. A cryptocurrency analyst, referencing the chart seen below recently said:

As he explains, he thinks that the fact the cryptocurrency has managed to hold the low-$17,000s is a sign that it will soon move to $20,000. The two wicks seen in the chart above shows strength in Bitcoin price as it suggests there is a group of traders looking to buy the dip at that level.

Not the Only One That Thinks So

There are other traders predicting a Bitcoin rally from here.

Another trader shared the chart seen below, which shows that Bitcoin’s recent price action is bullish as it is managing to flip the low-$18,000s into support. This should trigger a move higher as this region has acted as resistance on multiple occasions over the past few days.

Bitcoin is also set to push higher on fundamental trends, such as the increase in money printing and further institutional and retail interest in this space. 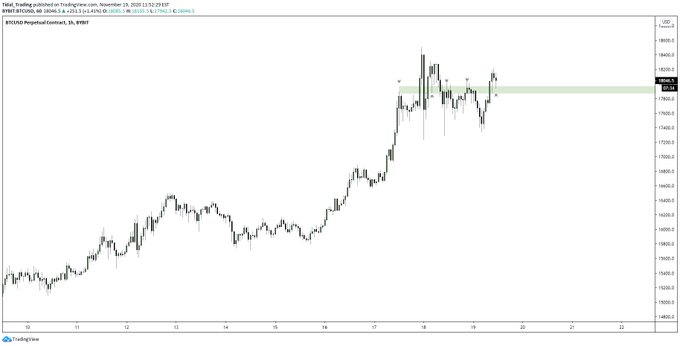