Ethereum is exploding higher as Bitcoin has pushed to new year-to-date highs just shy of $20,000. The price of the leading cryptocurrency currently is $615, slightly below the year-to-date highs but far above where it was just a week ago.

Bitcoin and Ethereum’s latest surge higher comes seemingly as a result of institutional buying pressure. Along with many public fund managers on Wall Street announcing their support for cryptocurrencies, analysts have noted a spot bid pushing the market higher.

Analysts are optimistic that Ethereum, especially will soon move higher as a result of positive fundamental trends. Bitcoin continuing to rally could give ETH further fuel to move higher as well.

An analyst recently shared the chart seen below, noting that Ethereum could move to $800 as it manages to move above key technical levels.

The chart shows that ETH reclaimed the key $420 level as support during the correction in October. Ethereum confirming this level as support should confirm a move toward $800, the analyst suggests. 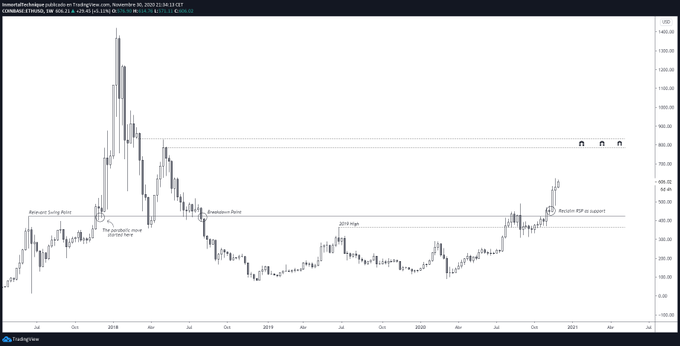 Bitcoin is Bullish Too

Bitcoin is expected to move higher in the medium to long run as well, boosting Ethereum’s probability of moving seriously higher.

Commenting on Bitcoin recently, Raoul Pal, CEO of Real Vision, revealed that he has deployed basically all of his liquid net worth in the leading cryptocurrency:

“Ok, last bomb – I have a sell order in tomorrow to sell all my gold and to scale in to buy BTC and ETH (80/20). I dont own anything else (except some bond calls and some $’s). 98% of my liquid net worth. See, you can’t categorize me except #irresponsiblylong Good night all.”

Analysts are optimistic that further strength in the Bitcoin price could lead to a bullish bid for altcoins.