Against Bitcoin, Ethereum has been embroiled in a brutal bear market for the past two years.

There was a point when one ETH was worth in excess of 0.1 BTC, but those days have long passed. Now, Ethereum trades for under 0.03 BTC — a far cry from its all-time highs. But multiple analysts say that the asset is on track to see a strong recovery against Bitcoin in the months ahead.

As Bitcoin has flatlined, Ethereum has actually been inching higher due to an influx of ETH usage spurred by growth in decentralized finance. These slight gains have allowed the cryptocurrency to print positive technical signs against the market leader.

One trader noted that the recent price action has enabled Ethereum to break past a crucial downtrend against Bitcoin. This simple technical occurrence primes the asset for at least a month of upside, the trader explained further.

“Wonderful 2W close for $ETH / $BTC. After such long consolidation, this break out should lead to 2 or more strong 2W candles for the bulls. 50 RSI as support for the first time in 2 years,” he added, referencing how the pair’s relative strength index reading is favoring appreciation.

This optimism about ETH’s prospects, especially in regards to the asset’s trading pair against Bitcoin, has been echoed by a swath of other traders.

Long-time commodities analyst Peter Brandt shared the chart below earlier this month. It suggests that against Bitcoin, ETH can gain 20% in the weeks ahead because of a “significant breakout.” 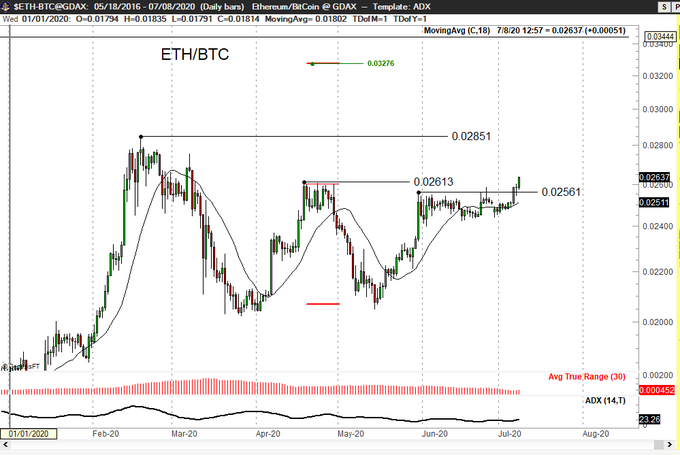 There’s also macro analyst Raoul Pal, a former head of hedge fund sales at Goldman Sachs. He said that there’s a fair likelihood ETH is “going to be the [initial] outperformer” in the upcoming cryptocurrency bull cycle.

Further backing the bullish on Ethereum narrative, the asset’s fundamentals seemingly are stronger than ever.

Coinbase’s Max Bronstein, who works as part of the firm’s institutional and ventures team, recently shared that two of the blockchain’s metrics have surged. They are as follows:

Crypto is having a major reflation moment — soon to be on par with, and likely exceed, the 2017 boom.