Chainlink‘s On-Chain Strength May Help Guide It Back Towards $20.00

Chainlink has been flashing signs of immense strength in recent times, with the cryptocurrency’s recent “rug pull” decline being heavily absorbed by LINK bulls.

This has allowed the crypto to find some stability within the upper-$16.00 region, with buyers now attempting to lay the groundwork for it to see further near-term upside.

It does appear that this is a real possibility as well, with analysts widely noting that Chainlink may soon surge up towards its all-time highs around $0.20.

This overt technical strength comes as it also develops on-chain strength as well. One research firm noting that LINK’s unique address count is remaining incredibly strong compared to that seen by many of its peers.

This may support the notion that it is well-positioned to see further upside in the days and weeks ahead.

Chainlink’s Technical Strength Grows as It Stabilizes Above Key Support

At the time of writing, Chainlink is trading up over 4% at its current price of $16.60.

This is around the price at which it has been trading at throughout the past several days, with its recent rebound coming about after buyers absorbed the massive selling pressure that sent it reeling from $20.00 to lows of $16.00.

From a purely technical perspective, this elucidates that bulls still have the upper hand over bears, and that its market structure remains firmly in buyer’s control.

As such, analysts are now expecting Chainlink to see imminent upside.

One trader pointed to the strong base of support that has been built between $16.00 and $16.50 as one factor that may help drive the cryptocurrency’s price higher in the coming days.

As seen in the below chart, the trader’s upside target currently sits just below $19.00, which is less than 5% below LINK’s all-time highs. 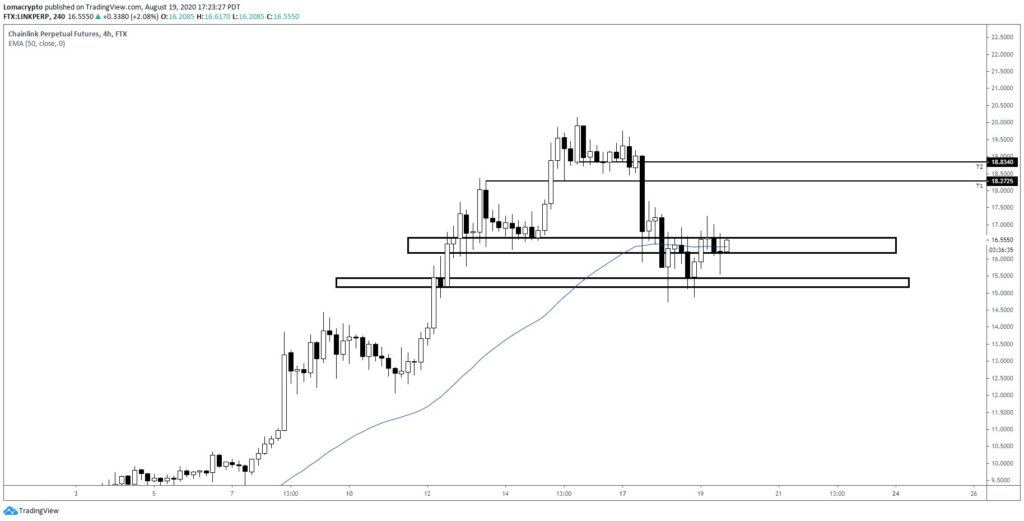 This On-Chain Data Shows LINK is Stronger Than Its Peers

Analytics platform Santiment noted in a recent tweet that compared to its peers, Chainlink’s unique active address count has remained incredibly strong over the past week.

“LINK has held up well against altcoins this past day since its -16% Monday dump. A major reason is the fact that its unique addresses circulating transfers on the network has remained high compared to other alts.” Because Chainlink is currently being boosted by a confluence of technical and fundamental strength, there’s a high likelihood that further upside is imminent in the near-term.