Equilibrium will bring their new governance token to the Polkadot network, incentivizing holders to participate in a token swap that will open the cross-chain DeFi platform’s rich features to an even wider user base.

Equilibrium, the team behind the largest EOS-based stablecoin, is announcing that its governance token NUT (Native Utility Token) will be extended to their recently announced Polkadot based platform via an optional token swap. The token swap will incentivize existing users to try out the new Polkadot-based platform and will take place on August 31st and run for 30 days, ending on September 29th.

Being a participant of the Substrate Builders Program (the program launched by Parity, the development company behind Web3 and Polkadot, to support the best teams building on Substrate in Business Development, Marketing and Technical Support), Equilibrium will work closely with Polkadot to upgrade/grow the ecosystem while developing the entire DeFi industry as a whole by offering pooled lending, synthetic asset management, and leveraged trading to the users of BTC, ETH, BNB, XTZ, etc.

To facilitate the tokenomics of the new platform, EQ token is introduced as the core asset of the Equilibrium. EQ token enables decentralized governance of Equilibrium, it is used throughout the system for product fees, bailsmen rewards, and transaction fees on the Equilibrium substrate.

Compared to NUT, EQ brings additional utilities to the holders across all aspects.

During the first 5 days of the Swap, retail NUT holders will be able to exchange their tokens for the new Equilibrium utility token (EQ) at a rate of 1 NUT to 100 EQ. After the initial 5 days, the swap rate will gradually decrease, finally reaching 1:75 after 25 days. The swap will end after 30 days.

After that, both the NUT token (EOS) and EQ token (Polkadot) will co-exist in parallel, as Equilibrium will allow users of both the EOS and Polkadot ecosystems to take advantage of the platform’s core features, bringing even more cross-chain functionality to the DeFi space. 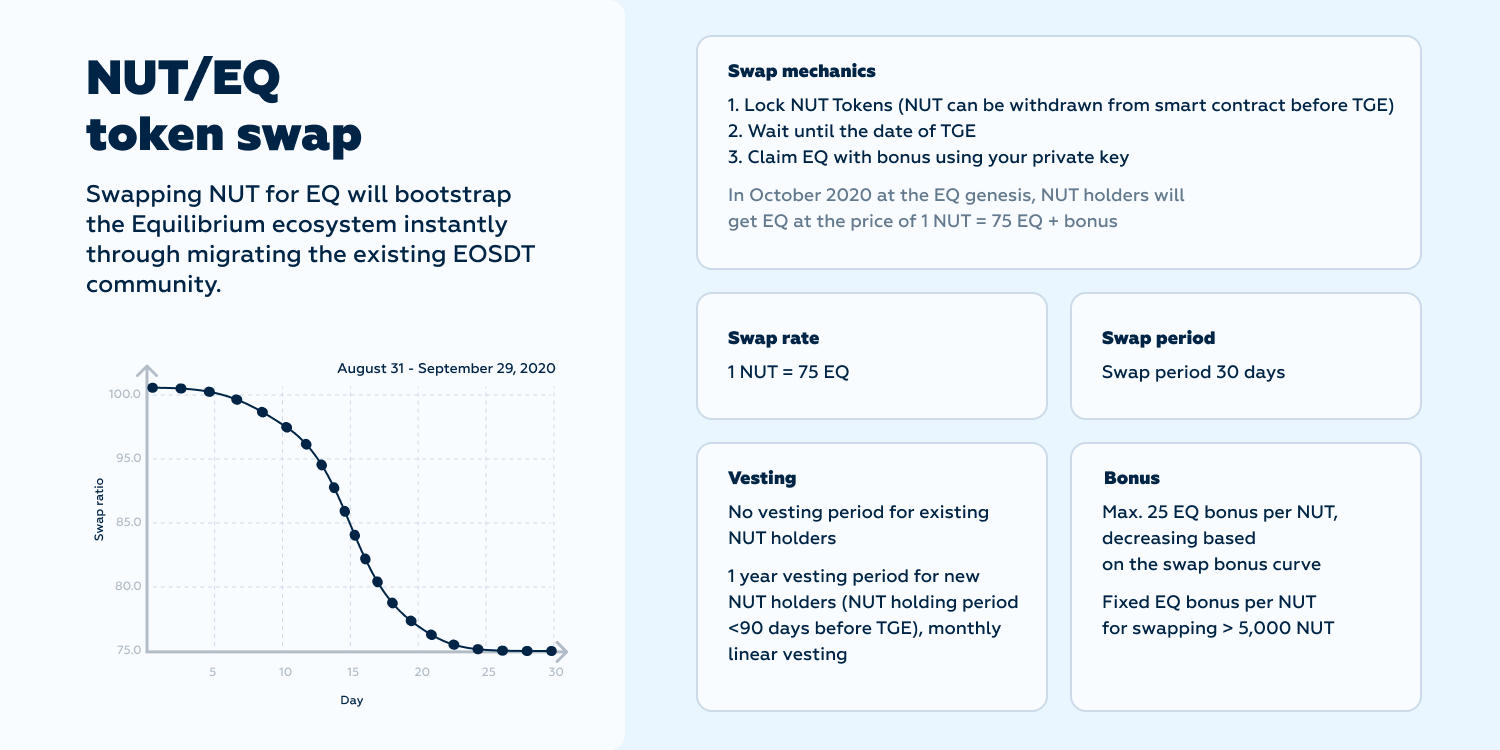 During the parachain auction, Polkadot’s token holders will be offered to lock their DOT’s to bid for a slot in exchange to EQ tokens that will be distributed as rewards to DOT owners who participated in the IPO by locking their DOT for a two-year period.